It was 9:20 pm Saturday night and I was walking to the garden, again, aided by a head lamp, with scissors and a measuring cup.

Because I wanted to make salsa that morning. Here is how my Saturday actually went.

I had to hit the farmer’s market before I could start. I needed a few items that weren’t quite ready in my garden. I had tomatoes, cucumbers, and zucchini in the house that needed to be used soon but did not have peppers or garlic yet. I got up early, ran down to my jar supply, gathered a plethera of pints, realized that I only had 2 lids in my canning supply. I suppose I could pilfer the 5 new jelly jars with lids. I have to get more today, I need to get going on pickles too.

Only first I had to take girl child to the dentist at 7:30 am. Yes there is a dentist open, not just on weekends, but early morning weekends. We finished at the dentist, and visited two stores to pick up the perfect birthday gift for her BFF. Finally, we are at the farmer’s market. I had taken a photo of my recipe before I left the house, that way I could check that I had all the ingredients. Of course once we were there I only glanced at it, and remembered I needed garlic and hot peppers. Got them plus a few extras – like fresh made irish soda bread! So good toasted with butter slathered all over. Also good with honey. Mmmm.

We got home, and I started chopping tomatoes. I even took the time to squeeze out the seeds. This is a step I usually ignore because it seems like a waste, but then I realize later that the salsa is too liquidy, so I tried to follow the recipe. Except I only had 5.5 cups of tomatoes in the house. So off I traipse to the garden. You may be interested to know that our garden is at the opposite end of our property, away from our house by about 1/4 mile. I pick all the ripe tomatoes, promising my garden I will be back to pick the cucumbers and zucchinis, and maybe pull a few weeds, and see if there are any remaining peas, or beans. And yikes those turnips have to get processed today!

Back in the kitchen, I now have 7 cups of tomatoes, seeded, and chopped. I start on the next ingredient, 2 cups chopped, seeded, peeled cucumbers. This the is the main reason I chose this recipe. If you garden you know there are always too many zucchini, and the same can often apply to cucumbers, and tomatoes. I had searched the internet and found several recipes for zucchini in salsa, but none of them were canned, so I checked my blue book, and found the Fiesta Salsa. It contains cucumbers, which I discovered over the years of too many zucchini to deal with easily, could be substituted for cucumbers in most canning recipes. Bread and butter zucchini pickles are amazing by the way.

I seeded and chopped, but did not peel, 1 cup of cucumbers and 1 cup of zucchini. I didn’t want to chance the flavor too much, and I don’t believe in peeling cucumbers or zucchini. Such a waste, althought I’m sure there is a reason the recipe planner wanted me to peel them.

Next ingredent, hot peppers, several kinds, equalling 4 cups. I removed seeds, and threw them into the food processor. I’m a whimp when it comes to spice so I got a few medium hot peppers, and most mild hot peppers.

Then I was called away to help unload the animal feed from the truck. I realized in that moment that the feed shed really had to be cleaned, since I had officially evicted the chickens who had been calling it a coop for the last year. I emptied and cleaned, and organized and now it is a working feed shed only again. Although I think we will need to store firewood in it this winter.

Back in the kitchen, I realize I have only purchased 2 cups of peppers, so I topped it with 2 more cups of zucchini and cucumber. So much for me finally following a recipe.

Next ingredient, 1/4 cup minced cilantro. I don’t usually like the taste of cilantro, and usually substitute parsley from our patch, but I did not get a patch started this year, and guess what, I didn’t pick any up while at the farmers market.

Out I go to mention going into town to my hubby. He is getting ready to reattach the tiller to our garden tractor. So I stick around to help him out. Then go to check out the chickens in their new space, collect eggs from all around in their yard. Notice their water is low, fill it.

Get back inside, let the hubby know I have to go back to town. He lists some items he needs. I make a list, it includes cilantro, and majoram. Grab boy child and let girl child nap. Off we go.

I park in the lot near the co-op, and decide to run into the thrift store first. Boy child needs a few items for his Renaissance Festival costume. We look, probably linger too long, then head to the co-op. I pick up cilantro, and majoram. No sign of fresh parsley, I hope I still like it once the recipe is complete. Head off to fill hubby’s list.

Stop at 2 more thrift stores on the way. Find a vest that will be a perfect doublet. Get hubby’s items. Check the list again. All it good. Head home.

As we are pulling into the driveway. Hubby informs me we are going to work in the garden. He wants me to show him where he can till – there are some produce that is done or I have given up on. The letuce row that has bolted. The pea row that the wildlife consumed. The root row, where we pulled all the turnips.

We worked hard. Pulled giant weeds so the tiller could make it through. Pulled posts and string. Weeded around the peppers and tomatoes. Moved all the volunteer tomatoes from the rows we were tilling under. Replanted the tomatoes, picked the cucumbers and zucchinis.

Finally back at the house. We are all tired. I turn on the heat for the boiling water canner. We sit for a few episodes of Once Upon A Time. Send the kids off to bed.

Back to the kitchen. Start the dishwasher to sanitize my jars. Add ingredients to the pot, slowly, checking them off as I go.

Shoot! I only needed 3 cups of hot peppers! I pull 1 cup of the zucchini/cucumber mix off the top, reach into fridge, open bag – nope that’s asparagus. GAH! And so I was walking to the garden at 9:20 pm to get chives, desperate to finish the salsa, because there is no room in the fridge to store anything overnight.

A little over an hour later I am finally done. I did run into a little trouble with the limes being scary old in the bottom drawer of the fridge, but I figured it out. 5 pints plus 1/2 cup were completed. 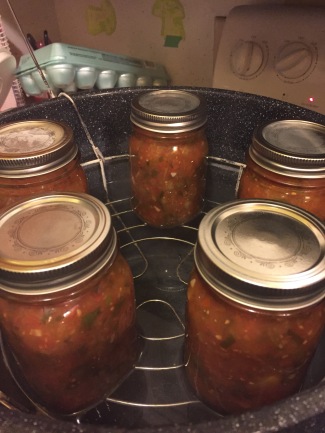 One thought on “Fiesta Salsa Recipe”